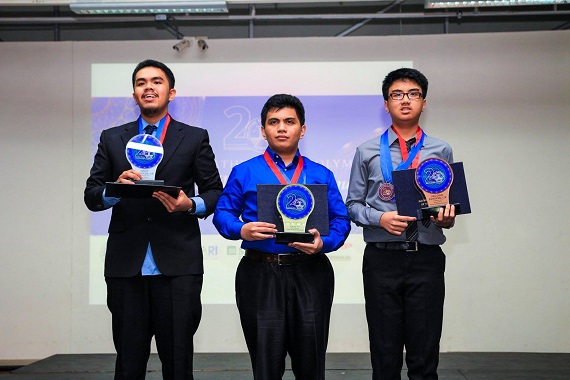 It was a big night for Pinoy math geniuses as the 20th Philippine Mathematical Olympiad (PMO) held its final round of competition and awarding ceremony at the Ateneo de Manila University in Quezon City.

Dulay finally claimed the top spot after his first runner up victories in the 2016 and 2017 PMO finals while it was the first national stage win for Cajayon and Dela Cruz. Even DOST-SEI Director Dr. Josette Biyo noticed that the final stage is home to some familiar faces, but she aptly added that this stage is not short of surprises.

Dulay won P20,000 cash prize, a medal, trophy and gifts from Sharp and Manulife. Cajayon got P15,000 cash prize while Dela Cruz received P10,000 along with medals, trophies and gifts. Area Stage winners and National Stage finalists were also recognized in the event.

Being a national finalist in the country’s oldest and most challenging mathematics competition is no easy feat. From 4,678 junior and senior high school students who took the qualifying examination, only 208 made it to the Area Stage.

Dr. Biyo expressed her appreciation for the organizers and participants of the competition. She also appealed to the students to use their talents to help the country.

“Mathematics is beyond answering those challenging problems. If the Philippines will ever catch-up technologically with more advanced countries, we need more maths engraved in our DNAs. As young math geniuses, we need your help to make that happen,” Biyo said in a message delivered by SEI Deputy Director, Albert G. Mariño. 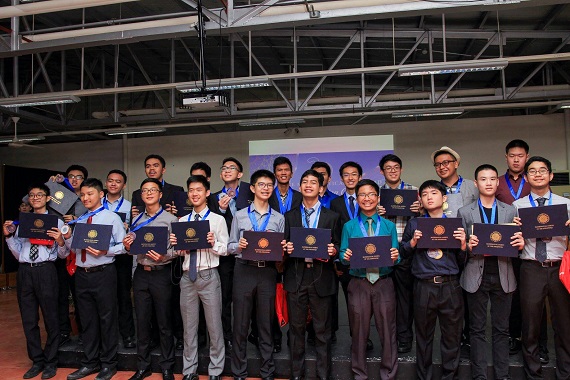 The PMO is organized in partnership with the Mathematical Society of the Philippines (MSP) and the Department of Science and Technology - Science Education Institute (DOST-SEI) with Hyundai Asia Resources, Inc. Foundation, Manulife Business Processing Services, Foundation for Upgrading the Standard of Education, Inc., and Sharp Calculators as major sponsors.

The 21 National Stage finalists will undergo the five-phase Mathematical Olympiad Summer Camp (MOSC) from February to July this year. The results of which will determine the Philippine Team in the 59th International Mathematical Olympiad (IMO) to be held in Cluj-Napoca, Romania from July 3-14, 2018. Last year’s Philippine Team bagged a total of six medals and maintained their impressive #17 world ranking.