DOST-SEI scholars as Advocates of Peace

With the aim of fostering patriotism, as well as bridging the gap between different cultures and belief systems for inclusive sustainable peace, the Department of Science and Technology-Science Education Institute (DOST-SEI) brought the Two-Day Scholars’ Formation Program to the recipients of the Bangon Marawi Program on September 22-23, 2018 in “The City of Golden Friendship”, Cagayan de Oro City.

Most of the participants were undergraduate scholars under the DOST-SEI Bangon Marawi Program, while there were some under RA 7687, RA 10612, and Merit Scholarship Programs.  Moreover, 30 masters and doctorate scholars under the Bangon Marawi Program and Accelerated Science and Technology Human Resource Development Program (ASTHRDP) joined in the formation program, actively shared their thoughts and insights to their fellow participants.

This Two-Day Scholars’ Formation Program is unique among past formation programs done in various regions because this featured tailor-made courses for MSU scholars who are predominantly Muslims. Its purpose is to help the members of their respective communities to gain knowledge and appreciate the value of promoting peace to prevent further violent extremism caused by lack of opportunities and poverty in the area.

DOST-SEI Director Dr. Josette Biyo emphasized how vital the role of a Patriot scholar is in preventing the spread of misguided faith practices and in facilitating the realization of dreams of other survivors as well.

The scholar-participants enjoyed fun-filled activities, which not just motivated ingenuity and resourcefulness but also shaped their critical thinking, moral values, and interfaith perspectives. Aside from the lectures on patriotism, volunteerism, and nation-building, distinct resource persons were invited to share some of their expertise on topics close to their hearts and faith – Islam and the Muslim culture.

Dean Macrina A. Morados of the Institute of Islamic Studies of the University of the Philippines Diliman gave a lecture on Understanding Radicalism and Preventing Violent Extremism in the Context of Nation-building and Development. She also shared her knowledge on interfaith perspectives and its challenges through her talk Islam: The Religion of Peace where she emphasized the important role of the members of the Muslim communities in peace-building which is imperative in achieving inclusive national development.

Dr. Mark Anthony J. Torres, the Director of the Institute for Peace and Development in Mindanao of MSU-IIT, put gravity on the concepts of inclusive security, inclusive development, and inclusive governance in his lecture Pathways to Community Engagement by Scholars and Professional. He stressed that no one should be left behind in community engagement towards national development. Dr. Torres also explained how culture of peace in Mindanao can only be achieved through infusing peace education, peace action, and peace research altogether.

Signed last January 26 by DOST Secretary Fortunato de la Peña, MSU President Dr. Habib W. Macaayong, MSU-IIT Chancellor Dr. Sukarno D. Tanggo, and Director Dr. Josette T. Biyo, the Bangon Marawi Program awarded scholarships to 217 BS, 20 MS, and 10 PhD students. The beneficiaries were immediate members of the families affected by the armed conflict or were displaced from their community because of the Marawi siege last year. This project is the immediate response of DOST-SEI to the call of helping rebuild and rehabilitate Marawi’s human and social infrastructures, particularly in the S&T human sector. Its primary goal is to inculcate to the beneficiaries the love of the country, strengthen their Filipino identity and citizenry, and deepen their trust and confidence to the Philippine government.  (30)

Left to right: (1) MSU scholar-participants deciding which body part is the most effective to use in solving a specific problem in their community during Humanizing the Scholar activity. (2) One of the scholars during Pathways to Patriotism module, posting her name under her chosen pathway of action in answering the call of the nation.

Left to right: (1) Dean Macrina A. Morados emphasizing the importance of proper contextualization of the Qur’an verses to avoid misguided practices leading to violent extremism. (2) Dr. Mark Anthony J. Torres explaining how culture of peace can be achieved by expanding their social capital and increasing their radius of concern. 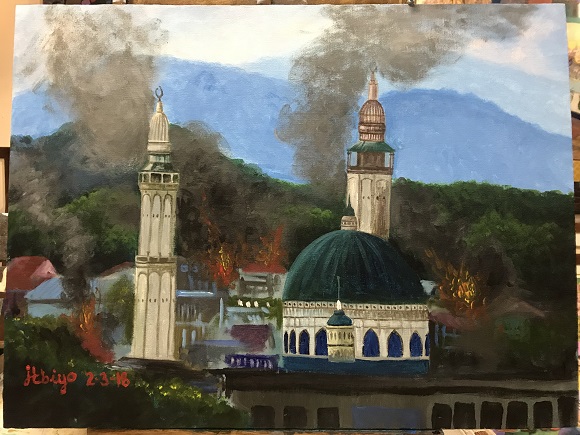 A painting by Dr. Josette Biyo given to Mindanao State University as a symbol of the interfaith bond fortified during the 2-Day Formation Program in Cagayan de Oro City. This artwork presents a scene during the siege that happened in the Islamic City of Marawi last 2017.