DOST-SEI Scholars as Game-changers for CBDRRM

Bannering the values of professional excellence, servant leadership, and social responsibility, the Department of Science and Technology - Science Education Institute (DOST-SEI) empowered 86 Leytean DOST-SEI scholars through what was dubbed by the participants as an “eye-opening and enlightening” Comprehensive Community-Based Disaster Risk Reduction and Management (CBDRRM) Training on July 28-August 1, 2018 at the Visayas State University (VSU). Prior to this training program, the scholars attended the two-day Scholars’ Formation Program on April 21-22, 2018 at the VSU to inculcate the values of volunteerism and patriotism among the scholars. This formation program is the Phase 1 of the Filipino Patriot Scholars Project.

Together with the DOST Regional Office VIII, local government of Baybay City, Leyte, and the VSU, this 4-day workshop focused on increasing awareness and knowledge of the scholars on Disaster Risk Reduction and Management (DRRM), as well as exposing them to social realities. All these put the scholars at the forefront of patriotism, volunteerism, and social change. The CBDRRM Training is the Phase 2 of the Patriot Project.

With a whole heart and open arms, the City Administrator of Baybay City, Mr. Deogracias E. Pernitez, welcomed the DOST-SEI and the participants. He encouraged the scholars to impart their acquired knowledge to the least of their brethren in the city. However, DOST Regional Office VIII Director, Engr. Edgardo M. Esperancilla challenged the participants to be part of the S&T human resources available and ready to serve before, during, and after disaster. Their goal is to have at least one DOST-SEI scholar in every community to lead Disaster Preparedness.

Part of the Phase 2 of the Patriot Project of DOST-SEI is for the scholars to embody the full sense of volunteerism and patriotism - giving back to their fellowmen and serving the nation. SEI Director Dr. Josette T. Biyo said that it is the institute’s main purpose to produce critical S&T human resources that can contribute to an inclusive national development. She added that it is SEI’s goal to develop scholars who “hindi lang pinapagaling ang talino, dapat may puso.” (…does not only sharpen the mind, but also with a heart).

Being the game changers of the future, as what VSU President Dr. Edgardo E. Tulin said, the DOST-SEI scholars’ young minds have the capacity to absorb more knowledge, become the agents of community awareness, and create huge socio-economic and socio-ecological impacts in the society. After typhoon Haiyan, it is very important for the scholars to be ready to help their respective communities in times of need. This is because first response should and must come from the community itself.

Dr. Rommel P. Gonzaga from Baybay City DRRM Office discussed what CBDRRM is, highlighting the importance of actively engaging the at-risk community in the “identification, analysis, treatment, monitoring and evaluation of disaster risks in order to reduce their vulnerabilities and enhance their capacities.”

The scholars were also given hands-on experience on basic life support, first aid and emergency response, and water search and rescue, and experienced 3D Hazard mapping through the help of the City DRRM Office.

Scholars were also taught how to conduct community profiling and baseline data gathering for the community risk and capacity assessment. This was for them to effectively identify the most possible risks and hazards that might happen and strengthen the communities’ capacities to prevent and mitigate the effects of impending disasters.

As culmination, some scholars had the chance to immerse with the community of Brgy. Pangasugan in Baybay City. They conducted Focus Group Discussion (FGD) on various community sectors, i.e. women, men, youth, LGBT, senior citizens, PWDs. They were able to identify the types and levels of risks the barangay experiences. They gathered data on the capacities, challenges, and needs of the community in terms of disaster preparedness, response, prevention, and mitigation. They were also able to identify, locate, and assess possible evacuation sites and their resources in the barangay depending on the type of hazard.

All these served as training for the Visayan DOST scholars to harness their potentials to be the catalyst of change. This was for them to be the leaders and key persons in protecting and securing the safety of one thing that is very essential - human life. Once fully equipped, we can tap to the endless possibilities that these future S&T human resource can contribute to national development. Their actions could be small in magnitude but never irrelevant. Their individual feats could just be ripples on water, but when together, they create a huge wave of transformation.  (30) 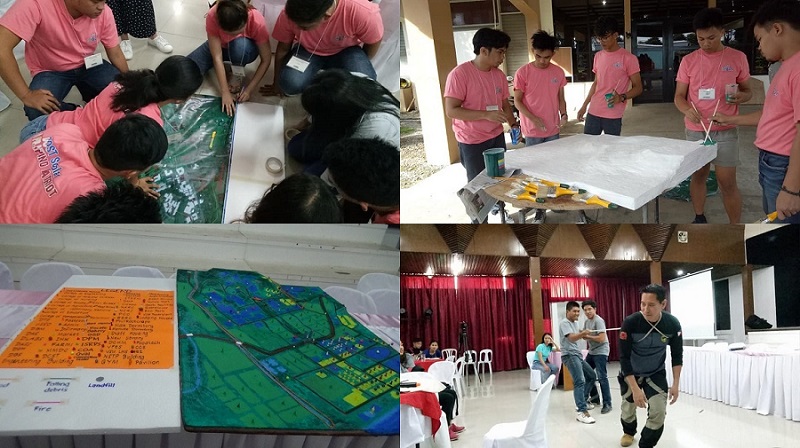 Clockwise from upper left: (1-2) The DOST Regional Office VIII Patriot Scholars are drafting and painting their own 3D Hazard Map of VSU-Main Campus. (3) The 3D Hazard Map of the university, designed by the scholars, shows the vulnerabilities, capacities, and resources of the campus. (4) On Water Search and Rescue Training, the scholars were given first-hand experience on rope tying and harness. 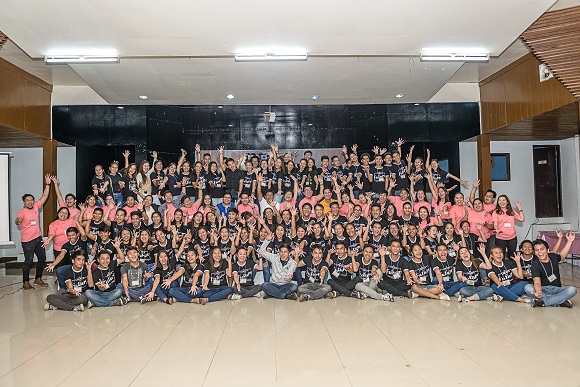 The DOST Scholars together with the staff of DOST-SEI, DOST Regional Office VIII, and Baybay City CDRRM Office during the 4-day CBDRRM Training.