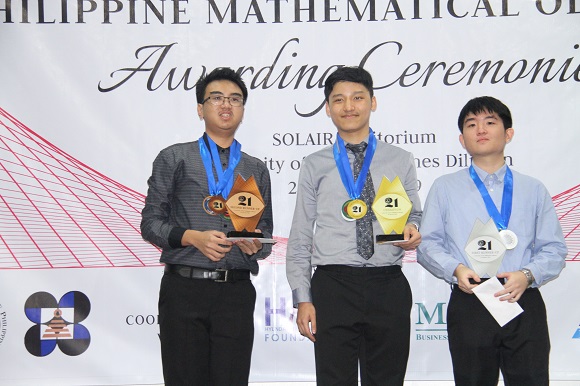 Two seasoned math competitors emerged as runner ups while an up-and-comer ascended atop of the 22 national finalists in the just-concluded 21st Philippine Mathematical Olympiad (PMO). The winners were awarded on January 26 at UP Diliman.

Area Stage winners and National Stage finalists were rightfully recognized in the event.  Out of 4,517 students that competed nationwide, only 22 were hailed as national finalists.

The PMO began in 1984 as a venue for mathematically inclined high school students to harness their gifts “in the spirit of friendly competition and sportsmanship.” PMO is the initial step in selecting the participants to the IMO, regarded as the hardest and most prestigious mathematical competition in the world.

In a message, Department of Science and Technology – Science Education Institute (DOST-SEI) Director, Dr. Josette Biyo, congratulated both the national finalists as well as the winners whom “shall proudly compose the flag-bearers in the 60th IMO this year.”

“Our chance of winning and doing better than last year is always high, which means the [IMO] gold medal is now always in sight. The pressure is there, but for us, pressure is good. It means the world regards us highly and we are expected to deliver,” said SEI Chief Senior Science Research Specialist, Dr. Ruby Cristobal.

“We have excellent and highly committed trainers to guide us to victory and of course, our students are very much capable,” she added before thanking the trainers leading the Mathematical Olympiad Summer Camp (MOSC) happening from February to May.

“My journey began with N and O, when the world seemed to tell me ‘no’ all the time. But I just refused to give back and said ‘no’ in return. It’s really about perseverance and in the end, we should just have fun,” said Patupat.

The PMO is organized in partnership with the Mathematical Society of the Philippines (MSP) and DOST_SEI with HARI, Manulife Business Processing Services, FUSE, and Sharp Calculators as major sponsors.

The results of the MOSC will determine the Philippine Team in the 60th IMO to be held in Bath, United Kingdom from July 11 to 22, 2019. Last year’s Philippine Team bagged a gold medal, a silver medal, two bronze medals, and two honorable mentions. (30)