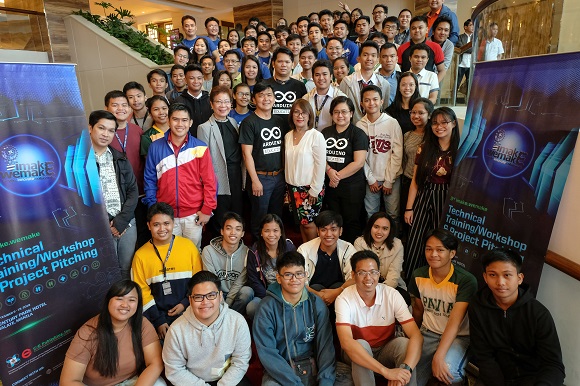 DOST-SEI Director Josette Biyo in a photo op with officials from C&E Publishing and the student innovators who will compete in this year’s imake.wemake competition.

15 senior high school teams from public and private schools in the country were selected to participate in the five-day training/workshop on Arduino programming on September 9-13, 2019 at the Century Park Hotel in Manila.

The event is part of imake.wemake, an innovative technology project contest organized by the Department of Science and Technology-Science Education Institute (DOST-SEI) in partnership with C&E Publishing, Inc.

Each team, composed of three senior high school students and one teacher-coach, attended the training facilitated by Thinklab Philippines. They were chosen as finalists after besting 70 other school teams who submitted project proposals for the competition.

Students from three campuses of the New Era University made it to the training stage of the imake.wemake competition.

The competition, now in its third run, was launched in July 17, 2019 during the National Science and Technology Week (NSTW) celebration with the signing of the memorandum of agreement between DOST-SEI and C&E Publishing.

DOST-SEI Director Josette Biyo graced the opening ceremony of the training along with C&E Publishing Vice President Gerric Gomez. Dr. Biyo thanked C&E for their support in the project and congratulated the students for their selection in the competition.

“We wish to create a space where you can share resources and knowledge as you work on your projects. Hopefully, at the end of the process, you will have your technology solution for your respective communities,” Dr. Biyo said.

Imake.wemake seeks to unleash the creativity of young Filipinos in innovation using accessible technologies. This year, participants will use the Arduino CTC 101 kits, provided by C&E Publishing, to build their projects. During the event, they were also given free kit-of-parts to start their project prototype.

“C&E is committed to actively raising the quality of creative and innovative minds of every Filipino student, especially with the advent of integrated STEAM education or STEM education in the global arena,” Gomez said.

The teams are given three months to build and test their projects. They will convene again in December 2019 for the Final Presentation and Awarding Ceremony where top three teams will win P100,000 cash prize and the Youth Innovation Prize each. (30)