The victors were announced on September 30 in an online Awarding Ceremony, which premiered live in the Department of Science and Technology – Science Education Institute’s (DOST-SEI) social media page. 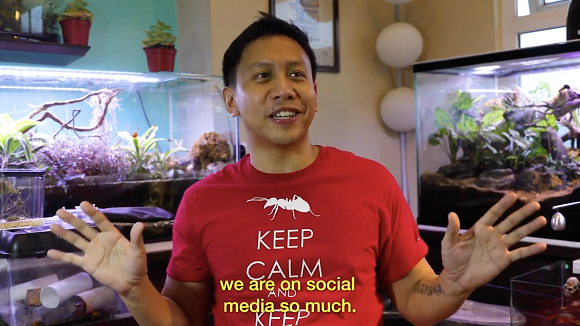 Film still from “Into the Minuscule World of Ants”

“Into the Minuscule World of Ants” documents the growing ant-keeping community in the Philippines led by Youtube personality, Mikey Bustos, who has 3.3 million subscribers. Filmmaker, Domingo, said that making the film made him realize there are many scientific groups and communities that are not popularly shown in the media.

“My exposure to the ant-keeping community showed me that there are hundreds of Filipinos venturing into scientific fields like biology that remain unseen. Also, shooting this documentary film made me see the alternative avenues where science is learned” he said.

He said he feels honored to have competed against great films with equally interesting tales and narratives, and that the win will inspire him to make more films.

“Our communities are filled with stories that need to be told. We do not need to chase stories. Instead, our local tales and narratives are more than enough to make captivating films.” said Domingo who earned P100,000 cash prize and a trophy.

Coming in Second in the Open Category was “Pauwikan,” a documentary about the nature and diversity of the turtle sanctuary in San Juan, La Union done by Gerylle Vanmarie Palabay of the Film & Media Arts International Academy. Winning Third is Edward Laurence Opena of Opena Cinematics / Cebu Normal University for his film, “The Man Who Talks to Fishes,” which narrates how a man enabled the Gilutongan Marine Sanctuary to become one of the country's top marine sanctuaries. They won P50,000 and P30,000 cash prizes, respectively.

Palabay’s “Pauwikan” also secured the Viewers’ Choice Award for receiving the highest number of votes during the film screenings. The film won P20,000 cash prize for the special award.

Onto the Youth Category, winning film “Sansala” tackles microplastic pollution in the locale of Dalahican, Cavite City. The documentary film explores how microplastics gravely affect the environment and the people relying on the sea for livelihood.

Somblingo, who is a second-timer in the competition, referred to the win as their team’s “comeback victory” after placing second last year for their film, “Lambat.” This time, they bagged the P100,000 cash prize and the top trophy.

“This year was our comeback victory where we were able to finally get a hold of the title. Making a film alone and entering it in a competition is already a milestone for amateurs like us, and this victory was more than enough to stir our passion in filming,” Somblingo said.

Their team considers the opportunity to echo to the residents of Dalahican the results of their microplastic experiment done during the making of the film as their most memorable experience.

“Educating people is something that we really enjoy. And being able to reach the hearts of thousands of people through a single film was like living a dream,” she added.

Completing the Top 3 in the Youth Category are the films “Sisto” by Ma. Diana Balansag from Bukidnon National School of Home Industries at Second Place, and “Beyond: Escherichia coli” by Juliana Milanbilen from Tagaytay City Science National High School at Third Place. “Sisto” depicts the problems encountered by the people of Bgy. San Miguel in Maramag, Bukidnon with the Schistosomiasis disease, while “Beyond: Escherichia coli” tackles the unseen community of the E.Coli bacteria and its nature. The films won P50,000 and P30,000 cash prizes, respectively.

DOST-SEI Director, Dr. Josette Biyo, congratulated the winners and finalists for taking the competition to another level with the quality and messaging.

“We’re very happy with the films we received this year and we’re especially impressed by how they tell their stories effectively and in a manner that does not stay away from science,” Biyo said. “We envision our scientists to be able to communicate their works effectively, and film is definitely a great platform. For this, we’re very proud of our contestants.”

Now on its fourth run, Indie-Siyensya remains one of DOST-SEI’s main platforms to promote a culture of science in the country. The competition is also the agency’s response to the growing field of science communication by using film as a medium of information dissemination and behavior change.

This year’s Board of Judges include Dr. Garry Jay Montemayor of the College of Development Communication, University of the Philippines Los Baños (UPLB); Director Seymour Sanchez from the De La Salle-College of Saint and Far Eastern University; Prof. Patrick Campos, Director of the UP Film Institute; renowned entomologist, Dr. Aimee Lynn Dupo of the UPLB Museum of Natural History, and Dr. Ruby Cristobal of DOST-SEI. (30)