The Philippine contingent to the 60th International Mathematical Olympiad (IMO) claimed an impressive win as all six members of the team won a medal in the oldest and most prestigious of the international scientific olympiads.

The national team held strong by bringing home one silver and five bronzes against more than 600 other contestants in the competition held in Bath, United Kingdom from July 11-22, 2019.

This is only the second time, after the 58th IMO in 2017, that all six representatives won a medal. The Philippines also ranked 31st out of 112 countries, up from last year’s 38th out of 107 countries. 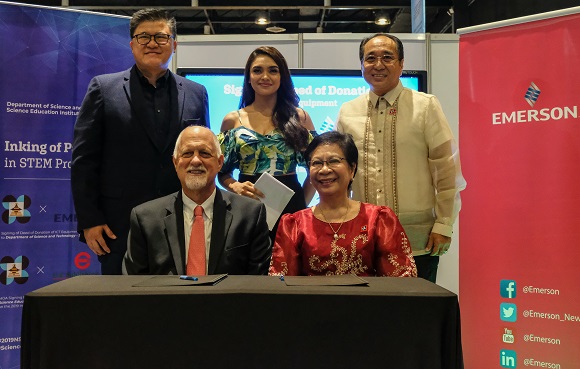 Students will have a more engaging classroom experience aboard the Science Explorer as Emerson Philippines donated laptops to the Department of Science and Technology-Science Education Institute (DOST-SEI), the agency behind the country’s first mobile science learning facility.

Since its inception in 2010, the Science Explorer bus has served more than 32,000 students from over 100 municipalities all over the country. Inside the mobile lab, top young scientists and engineers teach specialized science and technology modules to elementary and high school students, mostly from public schools in far-flung areas in the Philippines.

Senior high students battle it out in tech contest imake.wemake

Organized by the Department of Science and Technology-Science Education Institute (DOST-SEI) in partnership with leading educational materials publisher and distributor C&E Publishing, Inc., the competition seeks to unleash the creativity of young Filipinos in innovation using accessible technologies.

Students will get the opportunity to pitch, build, and present their science and technology projects that cater to important societal and community issues. This year, participants will use the Arduino CTC 101 kit to build their projects.

DOST-SEI Director Dr. Josette Biyo said that the project aims to improve the students’ engineering and technical proficiencies, as well as develop their communication, critical and analytical thinking skills.