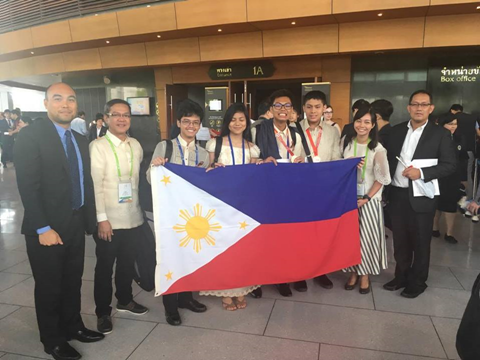 The Philippines made its first appearance in the prestigious International Chemistry Olympiad (IChO) with a bang, bringing home two bronze medals from the recently held competition in Thailand.

Dr. Nestor Valera, Associate Professor of Chemistry at Ateneo de Manila University and former president of the Kapisanang Kimika ng Pilipinas, Inc., said the entry of the Philippines in the said competition is aimed at developing future Chemistry experts in the country. He said the participation was a victory in itself and the medals were an added treat.

“Our participation in this year's IChO is historical because this marks Team Philippines's debut appearance in this prestigious event. The big bonus is that two of our students also won bronze medals,” said Valera who, along with De la Salle University’s Dr. Eric Punzalan, led the assembly of the Philippine team.

“This, along with every other great performance of our students in international science and mathematics competitions, is welcome development as we pursue further excellence in these crucial fields of science. We thank all the people behind the team’s success and the science community will continue to provide support in these endeavors,” Biyo remarked. (30)