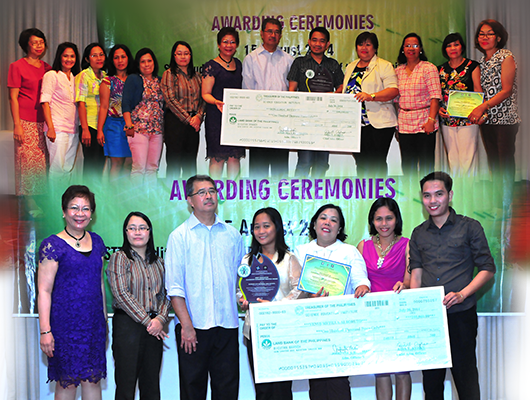 Championing innovation as an approach to effective science education, two schools from Surigao City and Albay topped this year’s search for innovative methods in teaching science and mathematics for large and extra-large classes. Surigao City National High School and Tabaco National High School bagged the 2nd Search for Innovative Practices in Managing Large Classes for Effective Teaching and Learning of Science and Mathematics, receiving P100, 000 each and a plaque of recognition for their innovative strategies. Surigao City National High School was awarded for their project entitled Beating the Numbers Through Strategic Intervention Materials (SIM): Innovative Science Teaching in Large Classes (Grade 8) which refers to a learning package composed of “guide cards, hands-on and minds-on activities, enrichment exercises, and others” that are introduced into the teaching methods to stimulate learning among Grade 8 pupils in Science and Technology.

Committed to fight the adverse effects of global warming through education, the Department of Science and Technology – Science Education Institute (DOST-SEI) and the Hyundai Asia Resources, Inc. (HARI) Foundation engaged 40 students and 20 teachers from 20 public high schools situated in high-risk regions in the country in a hardcore yet fun-filled Innovation and Climate Science Camp on 1-8 April 2014 in Puerto Galera, Oriental Mindoro. Dubbed as the Hyundai New Thinkers Camp, the activity was packed with exciting lectures, hands-on exercises, and exposure trips in the fields of hydrogeology and oceanography—two of the most critical areas being promoted by DOST due to its narrow human resources in the country—as facilitated by scientists from the University of the Philippines’ National Institute of Geological Sciences (NIGS) and Marine Science Institute (MSI). The Camp sought to encourage students to pursue S&T degrees and careers and instill deep appreciation of S&T as a way to address environmental and societal issues. The Camp is the third phase of the Hyundai New Thinkers Circuit (HNTC) Program that aims to hone students to become future world-class leaders and climate scientists. The first part was the HNT Summit held in October last year where students interacted with scientists, innovators, and industry experts to come up with their own climate science or community development projects. It was followed by the Bayanihan Project phase where teams implemented their proposed projects using the ?10,000 funding given by HARI.