Two schools that won in the national search for the most innovative practices in teaching large and extra-large classes echoed their strategies to fellow educators in hopes of having them replicated to other schools. In the “Forum to Disseminate the Winning Innovative Classroom Managment Practices” held on 17 December 2012 at the Heritage Hotel in Pasay City, representatives from Bacong National High School (BNHS) from Salug, Zamboanga del Norte and Looc National High School (LNHS) from Calamba City, Laguna detailed how they employ their innovative methods branded as Bacong Developmental Instruction (Project BaDI) and Flock Program in Managing Large Class Size in Mathematics III, respectively. Schools with large classes from Metro Manila and Region 4A represented by its division superintendents, principals/school heads, and science and math supervisors and teachers attended to the said forum.

SEI to boost ICT use in science education

Imagine Filipino students entering a classroom equipped with advanced computers in desks connected to a central server and can be viewed in a 3D capable television while a teacher talks about integers or digestion. Sounds too superficial? Some schools in Taiwan don’t think so.

And this is basically what the Science Education Institute envisions to be the state of science education in the Philippines in the future. 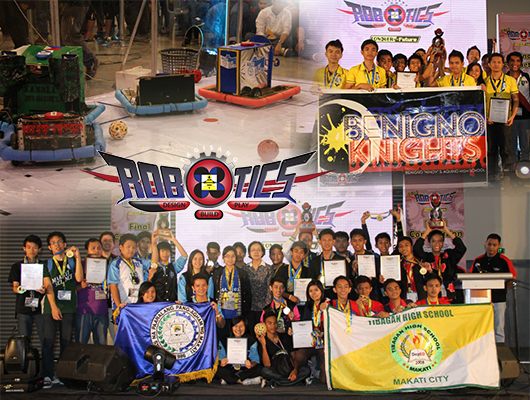 Four public high schools from Makati City ruled in this year’s 2012 Tagisang Robotics, the Philippine’s first and only varsity type robotics competition. Benigno Aquino High School Team Benigno Knights topped this year’s elimination round with a clean 6-0 slate, earning them the Best Team Award and winning P100,000 cash prize, P30,000 for their coach Edwin Engana, medals for all students and a trophy for their school.

The alliance of Bangkal High School Team Super Automated Mechanize Universal Electrobots (S. A. M. U. E. L.), Tibagan High School Team Cybertron, and Makati Science High School Team MakSci Immortals ruled in the Final Round as the Best Alliance and taking with them P150, 000 cash prize, their coaches Marvin Ragasa, Dorothy Naval and Job Ferrer, respectively, getting P10,000 each, medals for students and trophies for their schools.

On point to the target and off to Malaysia. This is the feat of the duo from Rizal National Science High School (RNHS) after winning the National Water-boosted Rocket Competition last recently at the University of the Philippines Los Baños (UPLB) Freedom Park Lower Grounds.